I believe that everyone has a story to tell, as we all are going through the book called life with various chapters in it, we just have to find the right words to say it all. Books not guns, culture not violence ️ 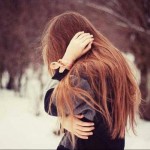