A light of happiness shot across his conscience – ( SARMAD NAEEM )

Why does the book seem to be as luminescent as the sky itself? Could some scripts of literature radiate such glory?

He was just in another dimension, where the lit waters washed brilliance towards the shore. Where, dome of sky seemed immeasurable, and he could easily immerse himself, but where? In the dark blue ethereal sky? Or the deep soothing sea? Maybe both.

In the star-clad sky, he could feel himself stepping up and up towards the moon i.e. the epitome of imagination. Moon which cameod in almost every diverse form of scribbling. A theme of great reverence, moon symbolizes happiness of Eid, happiness of union and much more. Moon is a cherished gift for the beloved, though yet untouched. Einstein was right, logic could take you from a to z but imagination? It could take you anywhere.
The fantastic ambience grappled him and in moments he was liberated, from the shackles of cruelty of this world. He could almost see every beauty of the world through that round silver mirror. Ascending  the effulgent staircase, he dreamt of sinking in the literature, as the moon standing as the bindya of beloved’s magical veil. He didn’t want to return to the barbarians of this world.
Books are the best companions in solitude. They teach us almost everything, broadening our sphere of thinking and rendering us more useful to this ailing humanity.
Just as he was about to touch the sacred bindya, everything rolled back, spiralling back into the corridor of his mind. The sacred cherished gift of moon remained, once again, untouched as he was back in on his bedroom, lying supine and thumping from the majesty, he just witnessed.
SARMAD NAEEM,
FAISALABAD MEDICAL UNIVERSITY. 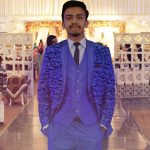